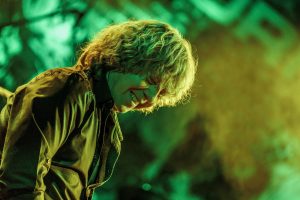 1. Simple things first – where are you guys from?

Michael:
Well, I´d like to confirm first that we are not from Canada – don´t mistake us for this thrash-metal band „The Exalted Piledriver“ from Toronto. As a supporter of the European Union and their ideals I tell you that we are from Europe. To name the nation-states: Eddie (drummer) and Rudi (Master of Ebony and Ivory) were born in the netherlands, Marc (bass-player), Peter (lead-guitarist) and myself were socialised in Germany. So we are an international band. And we invite the people of the United Kingdom to stay in The European Union. We would miss them and their sense of humour.

Michael:
Once upon a time… It´s so long ago that I can´t recall it exactly. Peter and I met in the late 1980s when we played in 2 different heavy-metal bands but occasionally on the same bill. Those were the days when no open fire was allowed in the dressing-room. Otherwise the concert halls would have gone up in flames because of all the hairspray the bands needed then to deliver a good show… After a fashion Peter and I gave up the dream (or ought to say I nightmare?) of becoming „full time“ and so called professional musicians. With our own material we never seemed to get anywhere. So we got back to where we started and worked on classic Quo-tracks. Marc Herrmann joined us in 1996, Rudi Peeters in 2004 and Eddie Claessens is the „new guy“ on drums. He joined us after the recordings of ROCKWALL had been completed. Our producer Stefan Kaufmann (former drummer with ACCEPT) played drums on the album.

3. How long have you been playing as a band?

Michael:
Peter and I founded PILEDRIVER in 1995. The current line-up (with the exception of Eddie) has been playing together for nearly 15 years now.

4. Before you get sick of being asked… where does the band name come from?

Michael:
Well, the name „PILEDRIVER“ is borrowed from the Quo-album of the same title. It was their first record on which they presented the sound Quo got famous for. The album also contained the hit single „Paper Plane“ that brought Quo back to the charts after a lengthy period without success. We are fans of the period from 1972 up to 1977 that we consider as Quo´s „heyday“. Since we had the intention to revive and to continue that sound of the „real Quo“ it made perfectly sense to call the band PILEDRIVER. But to be honest – in retrospective we would not do that again. Nowadays there are too many bands around that also call themselves PILEDRIVER. For a couple of years now the desire to become a band of our own right grew – we´d like to stand on our own feet. And I think we achieved our goal to a certain degree on „BROTHERS IN BOOGIE“ and especially on our latest album „ROCKWALL“. Since we played under the PILEDRIVER name for some 20 years we feel that it wouldn´t be a clever move to change the name now. We´d lose the goodwill we built up during the last 2 decades. So we will stick to the „brand“.

5. What are your influences?

Michael:
Musicwise I think it´s easy to identify our „sources“ and the ingredients – of course the original Quo from the 70s, but also a shot of AC/DC, ZZTop, Foghat and UFO. Put it all together and add our personal input – there you have it.

6. Describe your music. What makes you unique?

Michael:
We´re a five piece band (drums, bass, keyboards, 2 guitars). Well, of course that´s not special at all; what makes us different from other artists is first that we have very different musical backgrounds. For instance Rudi (keyboarder) and I had a classical piano and a theoretical education, the musical roots of our drummer are located in Jazz and Swing music, and my „partner in crime“ Peter, the lead guitar man, is a true fan of the 1980s heavy metal music; he´s heavily influenced by Randy Rhoads, Jake E. Lee, George Lynch and others. And when all these „ingrediences“ come together the musical output has a character of its own. Don´t get me wrong – up to a certain point our last two albums (BIB and ROCKWALL) are an hommage to the real Quo, and in places you can hear these roots – of course we´ve done that purposely. But there are (more) tracks on the album that sound like us, these songs are independent, take „FAREWELL“, „NAZARETH“ or „LAST WORDS“ (from BIB) for example.

Second thing that makes us different is that – according to my knowledge – there is hardly another band around that produces the kind of music we create. People who like classical melodic hard rock, boogie and shuffle tunes and similar music have to put on the old records of artists who have reached the end of their career or have already „left the stage“ – they are not around any longer. So to us it seems there is a „gap“ we have to fill because there is no new stuff for these audiences that are still there and that we are trying to reach with our music.
To state it clear: we don´t think that we have invented something new. In the musical segment we refer to everything has been played before. That´s perfectly clear to us.

7. Do you have any particular lyrical themes?

Michael:
Lyricwise there are some political statements: About the madness caused by religious fanatism, the misery of the refugees, the greed, selfishness and arrogance of certain people, abuse of children through pedophile priests and politicians… Well, we are musicians and we can´t change the world but with all this terrifying and alarming developments I feel that I can´t write about one night stands for instance. We want classic rock to live on but we don´t want to revive that stupid rock´n´roll clichés. In a world like this the lyrics should make sense. We´d like them to be serious and worth reading them.

8. What’s your live show like? How many shows have you played?

Michael:
PILEDRIVER is around for some 23 years now. I did not count the gigs but I estimate that we have been on stage a thousand times since we started. I can´t put my finger on it. To experience „PILEDRIVER live in concert“ without actually going to a concert I advise you to watch our BluRay we released in June 2017. There you have it. It´s all about fun, energy, movement, loudness – and our friendship. That´s why we still do it today. We´re not around for any money.

9. What’s the wildest thing you’ve seen or done at a live show?

Michael:
Playing two gigs on one day. That´s a wild thing because you´re really tired after that and no longer up to anything stupid…

Michael:
Nothing special. Amplification: The usual Marshall (Peter) and Engl-stacks (myself). On stage I´ve got about 10 guitars because of all the different tunings our songs demand. Many Telecasters, one Stractocaster, Gibson SG, Gibson Flying V. To be honest: I am not very interested in technical details. I do like a guitar or I don´t like. I check the instrument out in a store and then I know after a couple of minutes.

11. What, if anything, are you plugging/promoting at the moment?

Michael:
Currently there´s quite a lot going on in the PILEDRIVER camp since we have just released our new CD ROCKWALL. I do many interviews like this one at the moment. 3 Video-Clips will be shot in November for promo-purposes (Agitators, One for the rock, Farewell). And it seems that we will be on stage many times within the next 12 months because gigs keep coming in and fill our date-sheet. A European-tour as a support for a major act is also on the cards. So let´s see what the future holds in store for us.

Michael:
Staying alive and healthy, having fun with the guys from the band, playing as many gigs as possible, shooting another concert film for a new Blu-Ray, promoting Rockwall, hoping it’s gonna be a successful album. But regarding the reaction we got so far from both fans and writers I am very optimistic.

Michael:
I don’t need to think about the answer. Clearly we’d love to support UFO – one of my absolute favourites among the classic rock bands (sorry Quo fans). The band to open for us is The Gäs from Cologne in Germany. Really good band, really nice guys! You ought to check them out!